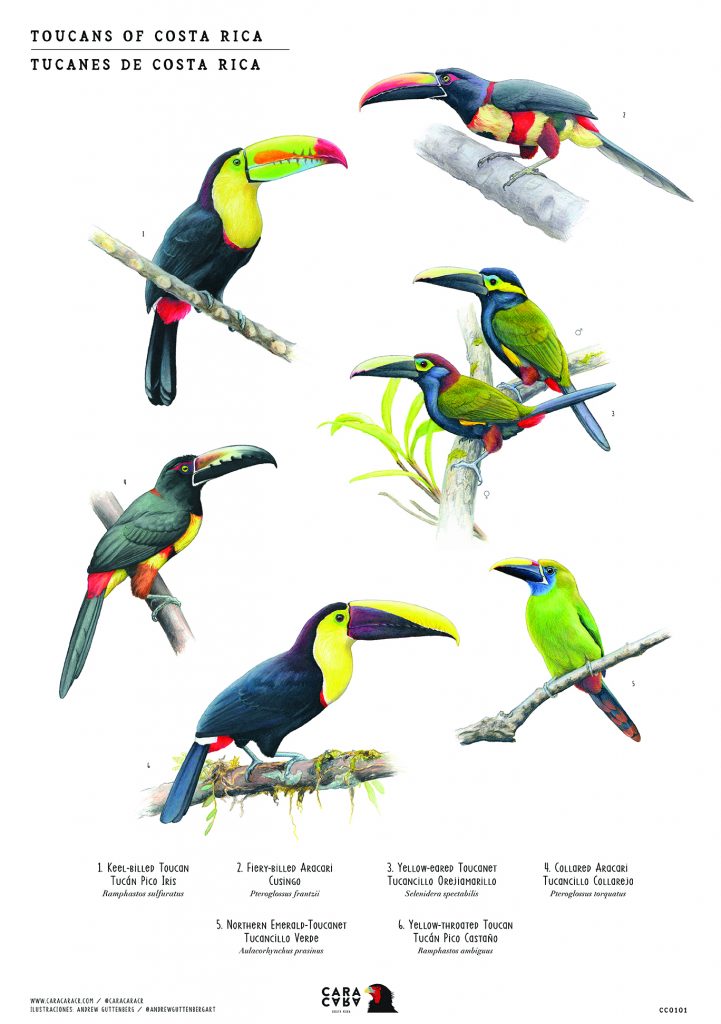 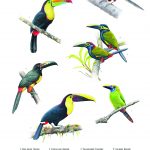 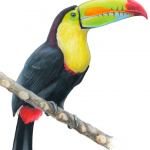 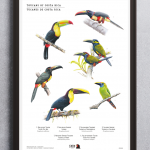 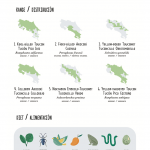 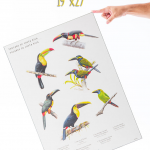 Small to medium-sized non-passerines with enormous and colorfully patterned bills, toucans have become familiar to many through their frequent appearance in popular culture and marketing. They eat a great deal of fruit, but they also supplement this diet with large amounts of animal material. In many areas in the Neotropics, toucans are some of the most important predators on the nests of other birds, and they are sometimes the focus of intense aggression by bands of passerine birds. The distinctive bill, with nostrils atop the very base, serves with its large radiative surface to shed excess heat for the many species that spend much time in the upper forest canopy exposed to the hot tropical sun.

•Legs and feet short, thick, with zygodactyl toes (toes in pairs, 2 forward and 2 back).

•Sexes similar in most species.

Ramphastids are found in a wide variety of wooded habitats, from lowland rainforest through open woodlands to montane cloud forest.

Most ramphastids are primarily frugivorous, but they also take insects, small vertebrates (primarily lizards and frogs), and bird eggs and chicks. Toucans swallow their food by positioning the food item in the tip of their bill, then tossing the item back into their throat. Some prey items are too large to throw back in a single bolus; these the bird will hold with the feet and pick apart with the bill before tossing them back to swallow.

Toucans are monogamous with biparental care. Several species breed cooperatively. In these, only the breeding pair incubates, preventing the helpers from accessing the nest until the chicks have hatched. All ramphastids nest in natural cavities, either cavities that have been excavated by other birds or, much less commonly, those that they excavate for themselves in soft, rotted wood. Nests are typically lined with wood chips and regurgitated seeds of fruit. Females lay 1 to 5 eggs. Both male and female typically incubate the eggs and feed the chicks. Incubation takes 15 to 18 days, and the naked chicks hatch blind, not opening their eyes for at least two weeks, and as much as four. The nestling period is fairly long, ranging from 40 to 60 days, and the fledglings can be fed by the parents or helpers for up to six weeks or so after leaving the nest.

Be the first to review “Toucans of Costa Rica” Cancel reply 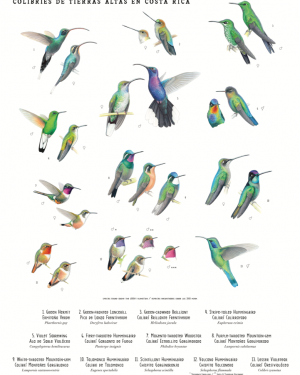 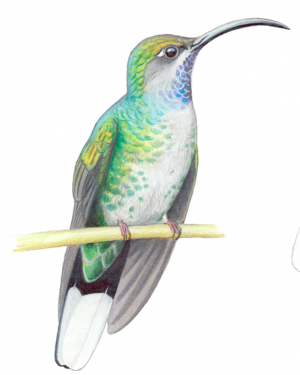 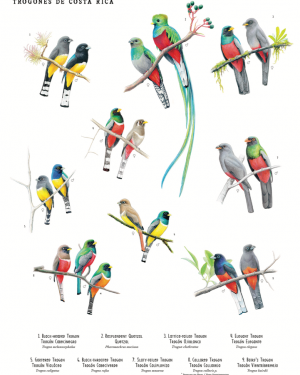 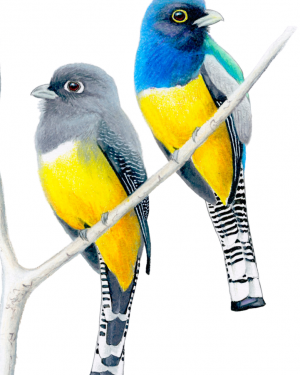